2019 marks the 5th centennial of the decease of one of the greatest minds in history. Besides being a painter, engineer, inventor, musician and a medic, his interests and activities included drawing, sculpting, architecture, science, mathematics, literature, anatomy, geology, astronomy, botany, writing, history, and cartography. Leonardo was a true polymath, or ‘ homo universalis’.

But one of his most striking professional endeavors is often ignored, and isn’t even mentioned on Wikipedia. Da Vinci was a skilled perfumer.

According to his biographer Giorgio Vasari Da Vinci studied plants, trees and flowers meticulously. He depicted them realistically and detailed in many of his paintings (as was the fashion in Renaissance painting, see my blog about Botticelli). 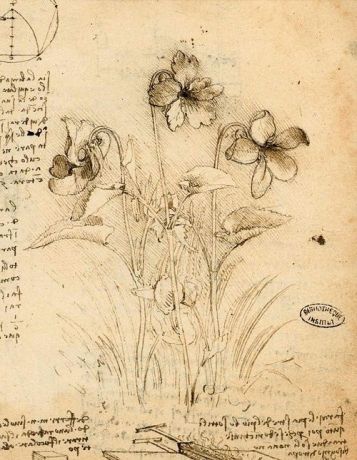 In his notes there are descriptions of several ways of obtaining the fragrant material (essential oils) of plants, fruits and flowers, among which maceration in alcohol, and enfleurage (which he calls a ‘modern’ technique):

His reasons for composing perfumes weren’t just aesthetic. He summed up the ingredients for a concoction against sea sickness, to protect oneself from dangerous attackers by diffusing foul and venomous – even lethal- fumes (‘odori nauseabondi e difensivi’) and for medicinal purposes (‘odori medicinali’).

One of the most poetic applications of his ‘smell design’ was for a garden in which he envisioned citrus trees (cedri e limoni) that would create a green and fragrant ‘roof’ so that the music of birds and odours would create a synaesthetic atmosphere.

Among the flowers he used for their oils were jasmin (Jasminum officinale), lavender (Lavendula spica) and bitter orange (Citrus Aurantium). He also used peeled almonds, as long as they hadn’t turned ‘muffa’ (mouldy).

All of these ingredients are used in perfumery until the present day. But he also extracted uncommon plants such as Ligustrum vulgare.

Even in olfactory terms Da Vinci was a visionary.