A nose witness report of the worst smell in the world

War correspondent Robert Dulmers (Amsterdam) is one of the few people that encountered it. A smell that is banished from our daily lives and society. Only in rather extreme circumstances, such as war, one is faced with it. With a horrified facial expression, eyes fixated on an invisible distant scene, he described it to me:

“The first time I smelled it, I automatically flinched and stepped back. It’s as being stung by a wasp. And even though I had never smelled it before, I knew…. This is the scent of a human decomposing body”

Dulmers – who is also a scholar and an author – continued talking about his experience by comparing it to a famous literary scene:

“What struck me was how immediate and unmediated my reaction was. Like the main character in “À la recherche du temps perdu” (In Search of Lost Time) by Marcel Proust who suddenly recalls his early childhood after dipping a madeleine in lime blossom tea, as he had done numerous times in the past. But the difference was: I had no recollection of this smell. Yet my whole body, my whole mind knew… or rather felt [slowing his pace of speech] this… is… death…”

After my question how he would describe the scent, and not the experience, he gave a rather surprising answer:

“I had smelled rotting animal flesh, and cooled bodies placed on biers, but that’s different. The smell of putrefied bodies is sickly faint and sweetish. It is extremely repulsive. If I had to compare it, it’s a bit like mashed baby food, but much worse”

Dulmers – after a multitude of experiences – realized there is no such thing as ‘the’ smell of death. There are several:

“It depends on how someone died. If there was struggle and agony – so called ‘death sweat’ – bodies can smell more sour and salty. Like the body odour of a runner but a hundred times stronger. It also depends on age”

The smell of death in art

In ‘normal’ circumstances, bodies would never start to reek to the extend described by Dulmers. They are cooled and then buried or cremated within a limited amount of time before the miasmas can reach the noses of the living. A rare historical example of a smelly rotting corpse, was handed down from the biblical and art historical tradition. But this too was a very extreme (and unlikely situation). When Jesus planned to raise Lazarus from the dead, bystanders objected: ‘but the body already reeks!” Yet Jesus performed this miracle by both overcoming the worst enemy of humanity, and the malodour that comes along with it. In some works of art we see the disgust manifested in the pinched and covered noses of those present. Christ however, as a supernatural being, always remains unaffected. 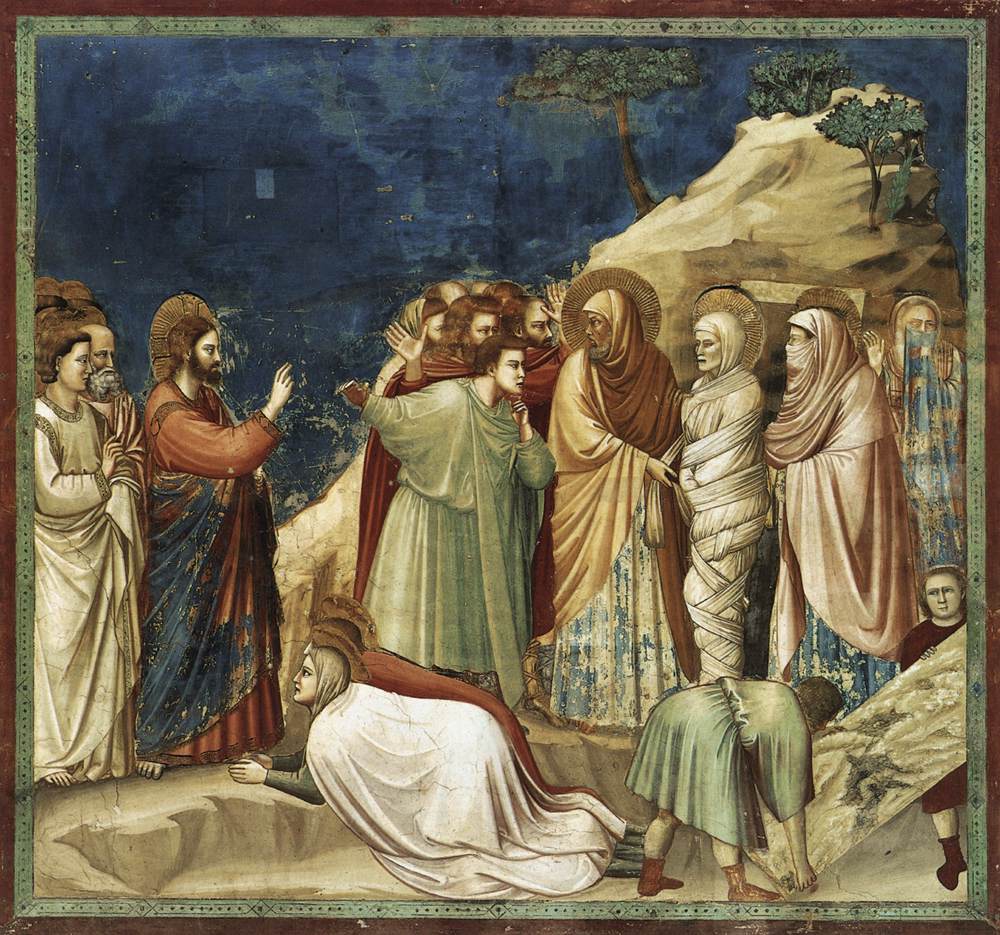 figure:  In this fresco only the ‘faint-hearted’ women cover their noses. Giotto, Raising of Lazarus, Scrovegni Chapel, Padua.1304 – 1306

But even before bodies start to decompose, cultures all over the world (subconsciously) practice some sort of smell control rites. Certain rituals such as putting flowers around graves and caskets are actually driven by the sense of smell. Have you ever wondered why the lily is a funerary flower? It contains a lot of indole which doesn’t just mask putrefaction, but actually perfectly blends in with it.

‘A God walks into an exhibition…’

Unlike in chaotic warzones, in rare cases this extreme smell is framed in an organized way and displayed in a museum. In 2016 olfactory artist Peter De Cupere (Belgium) organized the exhibition ‘The Smell of War’ commemorating the centennial of the first gas attacks during The Great War, which actually took place around the venue in Poperinge (Belgium). De Cupere invited several artists and perfumers (such as Gayil Nalls, Sue Corke and Hagen Betzwieser) to reflect on the smell of war (which isn’t always disgusting but can be quite pleasant at times) and some participants even created new work.

Figure: the venue for ‘The Smell of War’, curated by Peter de Cupere, Poperinge

The Juice of War

Maki Ueda (Japan, Netherlands) was one of the participating artists. Ueda recreated the scents of the destruction of Hiroshima and Nagasaki for her work ‘The Juice of War’, which was actually based on a visual memory:

“When I was a child, my bedroom contained a shelf of my mother’s books and one of these book was about Hiroshima and Nagasaki. Inside I found photos of burned and rotten bodies.[…] . It was in the high summer season so the bodies would quickly rot… The photos were so shocking to me that for nights I was afraid to go to sleep”

The artist (a vegetarian) distilled burnt and rotten meat in order to obtain the right odour. I asked her about the process of working with these disgusting scents. Her reaction is comparable to that of Dulmers:

“I didn’t want to overreact to the scent, but it was so powerful that it gave me a headache and made me vomit in the process. It was more of a biological reaction, like when I was pregnant I could not stand the presence of garbage”

So it turned out the scents were even more shocking than the images. Maki had to alter them in order to make them presentable:

“….when the scent was extracted with alcohol […] it did not have the power as I smelled it before. However, if I would have brought the original smell, there would be flies permanently and the exhibition would have had to stop. (Actually it once happened at Lakenhal, where I exhibited the smell of meat as one of the Dutch scents that Geisha’s encountered in Deshima. So I was a bit afraid….)” 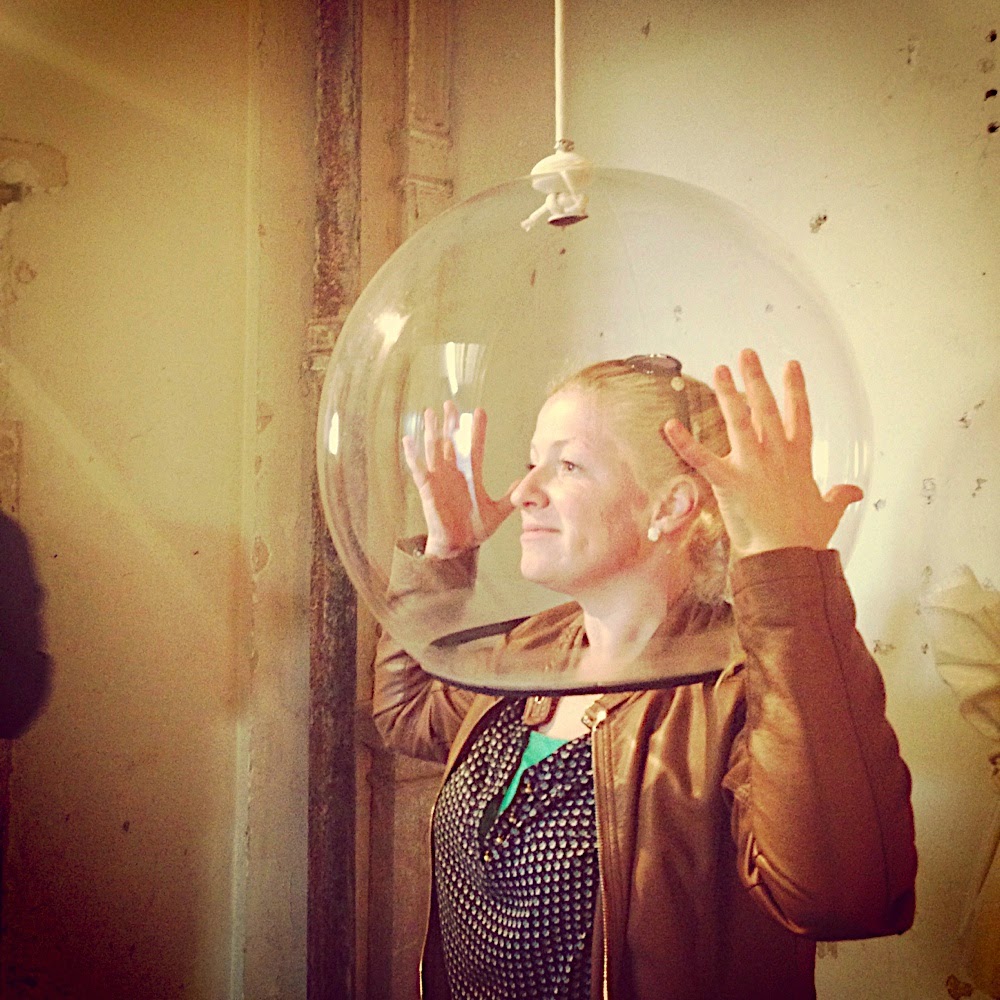 Figure: the Flemish prime minister smelling ‘The Juice of War’, 2015

We tend to contemplate and react more intellectually in the dystopian atmosphere of the museum. But is this actually possible when it comes to the smell of death? Even by culturalising, framing and trying to control it, the real thing remains too disgusting, too immediate, too primal as the reactions of these nose witnesses confirm.

Maybe only gods can visit exhibitions about the smell of death.